Previous: Apocalypse Now: Final Cut
Next: Behind The Scenes With 'Welcome To The Fold', Pt. 6: The Supporting Cast

Someone once said that American movies are about plots while European movies are about characters. That goes double for crime films. When they're about assembling a team for One Last Job, they're about the team, or the job, or the betrayal. Jonathan Glazer's Sexy Beast uses all that as backdrop for a contrasting character study: Gal Dove (Ray Winstone), the soft-in-the-gut ex-safecracker who does not want to leave his comfy Spanish villa for one last job; and Don Logan (Ben Kingsley), the bulldog soldier in Teddy Bass's (Ian Macshane) crime army who most definitely wants him to do it, and will latch his teeth into Gal's ankle and drag him bodily away from his wife and friends if he must.

Dove has no earthly reason to even consider Logan's offer. He lives with his beloved wife Deedee, an ex-porn star, in a mountainside hacienda with an in-ground pool. Every night it's barbecues and garden parties with his friend Aitch and his wife Jackie, also both emigres. One fine day a boulder detaches itself from the hillside behind where he's sunning himself, crashes into his pool, and almost pancakes Dove. That rattles his eyeteeth, but it does so far less than word that his old not-really-buddy Don Logan has decided to drop in. 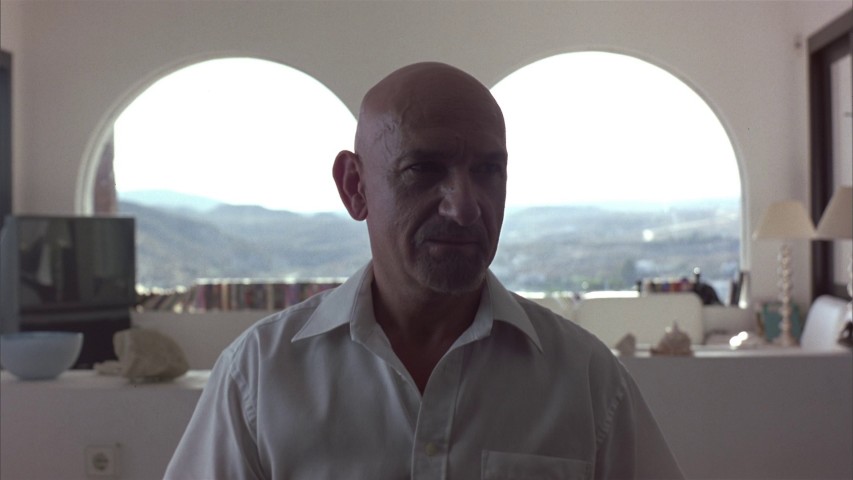 Don's mission is simple: Get Dove back to London to work on a safecracking job that involves an apparently impregnable high-security vault. The job is in a scant few days. Don does not want to hear any backtalk about how "sudden" this is, or any backtalk at all. For him this is a done deal: "You're at the Grosvenor on Friday, under the name Rountree, like Shaft." And Don is the ideal man to get Gal to come along and do this, because Gal is a gentle pudding of a fellow who likes his calamari and loves Deedee, and Don is a loveless, barking-mad, bullet-headed drill sergeant who utters even the word "the" as if it were a dare. "Yes, Grosvenor! Yes, Friday! Yes, Rountree! Yes! Yes! Yes! Yes! Yes!"

Don's also the perfect man to dragoon Dove back with him, because for Don it's personal. Why does Gal Dove, of all people, get to "fuck off to sunny Spain" and enjoy such fine company? Especially when one of them, Jackie, is the woman he had a dalliance with once and clearly still wants? Yes, even after all this time, especially now that she's in the hands of an dithering boob of a fossil like Aitch? And under all that is the suggestion that Don's rage is just the most visible symptom of a reservoir of self-hate that makes Gal's feelings of inadequacy look like the apex of Maslow's pyramid. 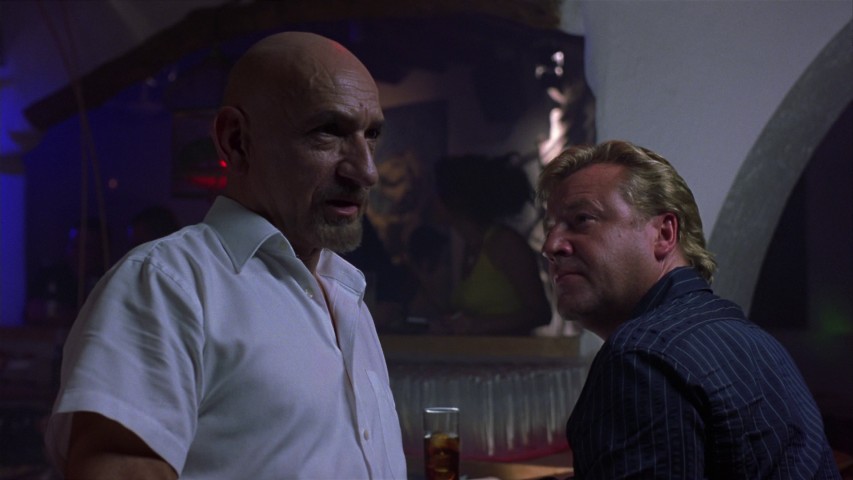 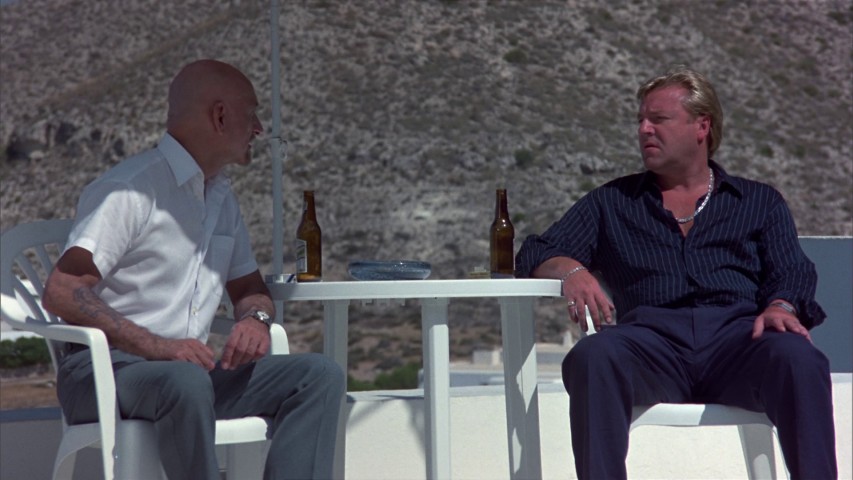 What happens in the second half of the movie is too much fun to ruin (in particular the hilarious mechanics of the heist), so I will have to tiptoe around it to make my points. But it is masterful in how the goings-on further illuminate the psychology of everyone involved. The reason Gal left the life isn't just because he did years in prison for his comrades and got back nothing for it (although there's that), it's because he doesn't have the sociopathy needed to be a fully functioning member of the criminal underworld, and being around folks like Don Logan has not changed that. Gal's not even a good liar. But by the final third of the film, he's in a position where he has to be one or else, because the only thing worse than a hot-blooded Don Logan is a liquid-nitrogen-blooded Teddy Bass.

Nobody was prepared for Ben Kingsley's performance in this film, perhaps not even Kingsley himself. He doesn't simply make Logan frightening, although that turns out to be something he's disturbingly good at. He also makes Logan tortured and sympathetic by way of a slow aggregation of gestures. In one scene he mutters to himself while shaving, and we get enough clues from his monologuing to see how his rage is chiefly displaced self-hate. A later scene, where he gets kicked off a plane for lighting a cigarette and then uses it to pin blame on one of the flight crew, looks at first just like a sociopath being exploitive. But in light of what came before, we have to wonder if we're seeing a sidelong clue as to what really shaped him.

Glazer was a music video and commercial director before making this his first feature, and normally I'm leery of that: most such directors eschew good storytelling over flashy visuals. But Glazer's storytelling instincts are spot-on, as he pruned what was originally a 180-page screenplay down to a trim 88 minutes. Occasionally he gets flashy, as with some interludes involving a monstrous, hallucinatory rabbit-monster. And he has some Tarantino-esque fun with the editing involving Don Logan telling the story of how he learned about the heist project. But for the most part (as he did in Under The Skin), Glazer just points the camera and lets the story, and the performers, do the heavy lifting.

Winstone was originally offered Logan's role, and it's not as if he can't play hard-nosed blokes, but Kingsley's performance also offers the better contrast. Not just against Winstone, but against Macshane, whose reptilian, predatory notes indicate what kind of hierarchy is at work here. It's not the ones who can beat you to death with their fists that you have to worry about. It's the ones who smile at you first, and then go ahead and do it anyway. If Gal knows nothing else, he knows this. Small wonder he prefers the poolside. 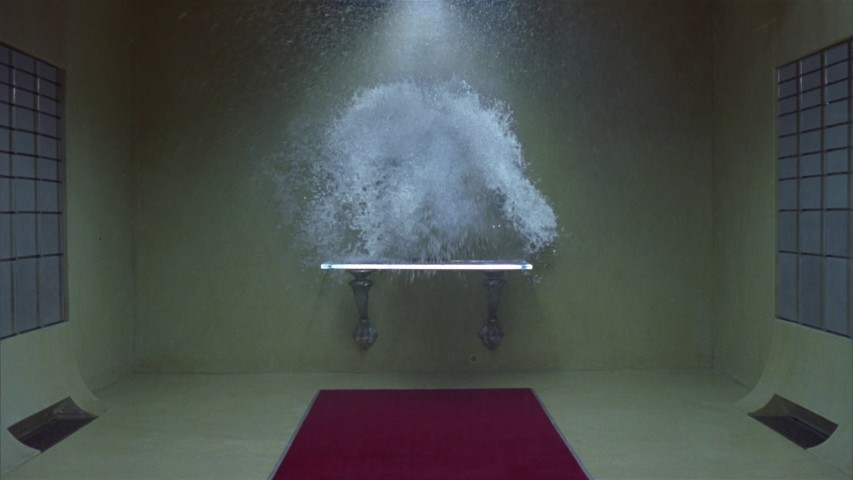 See all entries in Movies for the month February 2021.

See all entries in Movies for the year 2021.

See all entries for February 2021.